I was a Captain Marvel fan.
I said "was" because my hero's gone for quite a while now, but that's OK. The comic book depicting that death was a great one - more about it later.
The coming Disney+ series Ms. Marvel encouraged me to share my thoughts about what I perceive as a more subtle - and second - death.

Let me explain what I'm talking about. 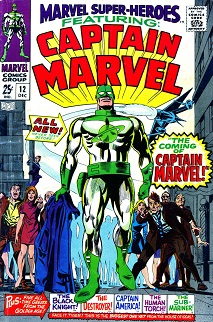 Captain Marvel's debut in comic books took place in Marvel Super-Heroes #12 (Dec 1967).
It was not much of an original thing: He's Mar-Vell, a Kree enemy of Terrans who ends up switching sides.
We had already seen something similar in the Marvel universe before - specifically in Fantastic Four #48-50 (Mar-May 1966), The Coming of Galactus.
Both Silver Surfer and Captain Marvel are aliens who turn against their master/superior and defect to Earth.

Marvel had so much confidence in its new character that started his own series in May 1968.
It probably had something to do with assuring Marvel's ownership of the name Captain Marvel that previously belonged to Fawcett Comics. 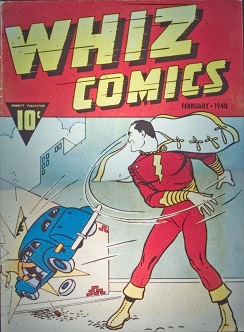 You probably know him, be it from his successful 70's TV show or his 2019 movie: Teenage Billy Batson becomes a superhero when he utters the magic word SHAZAM.
(You probably know it too, but I'll say it anyway because it is so cool: SHAZAM comes from the initials of Captain Marvel's seven "immortal elders":) Fawcett published the Captain Marvel character from 1939 through 1953. It was insanely popular at that time.
But, you may ask, if that was so, why the heck they stopped publishing then?
Because DC sued - and won - Fawcett alleging it was a plagiarized version of Superman.
(Well, technically, DC did not win, Fawcett gave up. But, still.)
Later, in 1972, DC would acquire the rights not only to Captain Marvel but to all related characters.

So, from 1953 to 1967, there was no Captain Marvel book on the shelves, but since 1961 there was a company called Marvel Comics. See where this is going?
Yeah. Marvel trademarked the name Captain Marvel. When DC acquired the rights, it could not use that name in covers anymore.
Since 2013, their Captain Marvel has officially been renamed Shazam. 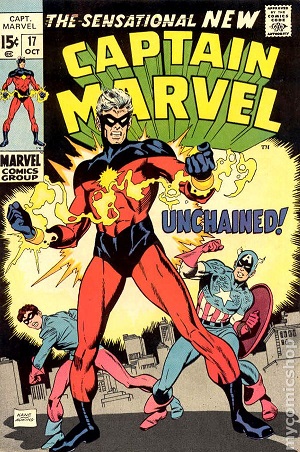 In Captain Marvel #17 (Oct 1969), our hero got a new visually-stricken uniform and was banned to the Negative Zone.
His only way to get out of there was switching places with Rick Jones, Hulk's former "sidekick", who had his atoms entangled with Captain Marvel ones.
(By the way, that's when I started following the series, but over a decade later.)
It has been said that writer Roy Thomas did that as a nod to the link between teenager Billy Batson and his Captain Marvel adult persona.

Later Cap would gain "cosmic awareness" and become Protector of the Universe. He would even face Thanos.
Captain Marvel's series ran for 62 numbers, ending in May 1979. 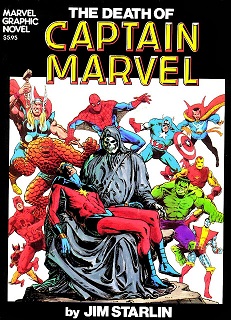 Credit: Marvel Comics of the 1980s

As everything good has to come to an end, how does a hero die? Maybe he loses a battle against an enemy? Sacrifices himself for the good of humankind? Or perhaps peacefully, on his bed, after a life of struggles?
None of these happened to Captain Marvel. He died of cancer. That's it. Nothing "glamorous", but a painful, heart-breaking, deadly sickness.
(Cap got sick in a fight against a Marvel third-rank villain, Nitro. This same guy later would screw New Warriors' lives and become the trigger to comic book's Civil War saga.)
This story was beautifully penned by writer/artist Jim Starlin in Marvel's very first Graphic Novel: The Death of Captain Marvel (1982.)
Even though death is not permanent in comic books in any way, Captain Marvel's one has been in effect for 40 years as of now and counting.

But, trademark. If one does not use it, one loses it. 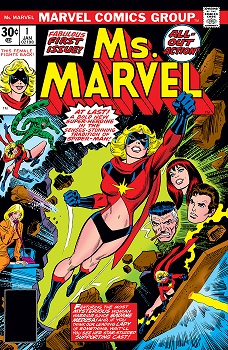 Stan Lee once feared Marvel's competition could create a female Hulk and take advantage of Hulk's TV show's popularity. To avoid that, he went ahead and created She-Hulk.
Maybe some of the same reasoning was in place when Marvel created Ms. Marvel. She's Carol Danvers, the head of security of a NASA secret base where Captain Marvel's brief secret identity (Walter Lawson) worked.
Her own series' first issue was published in Jan 1977. We learned in its second issue that, in an explosion that occurred in Captain Marvel's #18 (Nov 1969), Captain Marvel's DNA mixed with hers granting her superpowers.

Ms. Marvel has a troubled life story. She changed uniforms, powers, and names a few times. She also had her memories blanked by Rogue once.
(There's even a controversy about her being raped, giving birth to her rapist who was reborn as her son, and dating her son/rapist...)
She went by the names Ms. Marvel, Binary, Warbird, and, yeah, Captain Marvel. 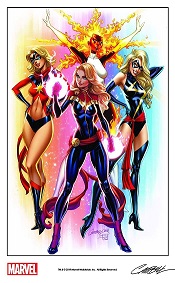 DC has had a strong female character, Wonder Woman, since forever. Marvel had... none.
Which character they could boost to that position? Spider-Woman? She-Hulk? Valkyria? (By the way, I love this character!)
The problem is, they can be seen as female counterparts of established characters (Spider-Man, Hulk, and Thor, respectively, in case you were guessing...)
Invisible Woman? Storm? They're members of successful teams and forever associated with them. Marvel needed an independent woman.
Black Widow? She's Russian. Err... Who else? Tigra???

In hindsight, Ms. Marvel was the best choice. It's been around for a while, can be promoted to Captain, and - best of all - Marvel's name is right there!
And the original character died 30 years ago, anyway.
So, Jul 2012 was when Ms. Marvel assumed Captain Marvel's mantle and name. 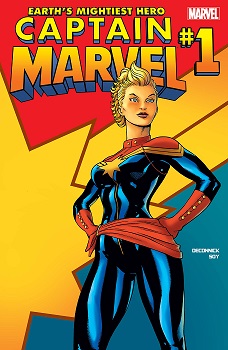 And it worked. I read the books and enjoyed them. Captain Marvel's memory was carried on.
In 2008, Marvel started what is now known as Marvel Cinematic Universe, and in 2019, Captain Marvel (Carol Danvers) joined it with much fanfare. 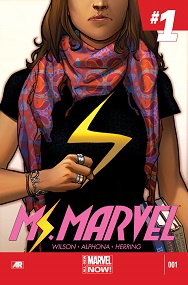 Remember what I said about trademark? If one does not use it, one loses it?
Yeah. Marvel cannot be accused of that. As the name Ms. Marvel was vacant, they created a new character to it.
She's Kamala Khan, a Muslim-American teenager who discovers she's Inhuman.
She quickly became a very popular character. I started reading it to see why all the buzz and at first was left unimpressed, but it grew on me over time.

Her first appearance was in Captain Marvel #14 (Aug 2013) and her first self-titled issue was published in Feb 2014.
This year we will see her in a new live-action Disney+ show. 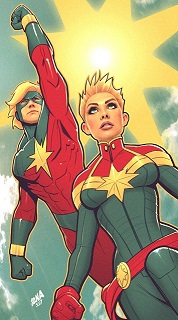 After this tortuous introduction to almost all Captain Marvels (I did not mention Monica Rambeau, Genis-Vell, Phyla-Vell, or Khn'nr, for instance), I'm getting to my point.
As I said, Marvel needed an independent, strong, empowered female character. But how independent is a heroine whose powers came from a man?
Some could say she did not become Ms. Marvel by her own merits. They came from Captain Marvel.
I suppose this is the reason Marvel managed to wipe Mar-vell from Carol Danvers' life.

In the comics, it was retconned that Carol Danvers is Kree on her mother's side, so that was the reason the explosion of the Kree machine could give her powers.
In the movie, Walter Lawson is nowhere to be seen, but there's a Wendy Lawson, a Kree scientist hidden on Earth.
She's the one who builds the machine that Carol Danvers explodes.

I understand why Marvel did what they did, and it had to be done. I'm mostly OK with that, but there's also that sense of loss hanging in the back of my mind.
It's almost the same as if we got Miles Morales' Spider-Man - who's a great character - but having Peter Parker being the scientist who engineered the genetically altered spider.
Miles Morales would still be a great character, but how much would we miss with Peter Parker being... unexceptional?

I guess as time goes by, it matters less and less.
Maybe I can found a club of old geeks, inviting the likes of people who sometimes scream, just out of the blue:
"I was there! I've seen it with my own bloody eyes! Han shoot first!"

Next week I'll be back to our transpiler.

Andrej Biasic
2022-01-05
Update: A few months after I wrote this post, but before publishing it, Marvel announced they are bringing Capitain Marvel back this month.
Yay! Let's see how it goes!